Vitamin D – How Much Should I Take To Kill Infections

by jamespereiramadsa
in Vitamin D
Comments are off for this post.

If you don’t know your vitamin D level, getting your blood tested to find out is one of the most important steps you can take to support good health. Low levels of vitamin D are linked to a host of physical and mental problems, while optimal levels protect against chronic disease and infection.

In general, AMPs are used by your body's innate immune response to kill invading pathogens, including bacteria, viruses, fungi and other pathogens. According to Dr. Richard Gallo, professor and chief of dermatology at University of California San Diego School of Medicine:2

“AMPs are our natural first line defense against infection. They are evolutionarily ancient and used by all living organisms to protect themselves … Too little CAMP and people experience frequent infections. The best example is atopic eczema (a type of recurring, itchy skin disorder). These patients can experience frequent Staph and viral infections.”

Gallo and colleagues conducted a study to find out more about how vitamin D and CAMP work synergistically to ward off infection.3 Using a mouse model for vitamin D-induced CAMP expression, it was found that CAMP can be regulated by vitamin D3 in mice.

Specifically, mice with the human CAMP gene were more resistant to gut infections, and a bioactive form of vitamin D was useful for treating staph infections on the skin. In an Oregon State University (OSU) news release, study author Adrian Gombart, professor of biochemistry and biophysics in OSU’s College of Science and a principal investigator at the university’s Linus Pauling Institute, explained:4

“Vitamin D3 regulates the expression of the CAMP, and Staphylococcus aureus is an important human pathogen that causes skin infections. With our mouse model, we showed that treating a skin wound infected with S. aureus with the bioactive form of vitamin D significantly reduced the number of bacteria in the wound.”

Previous research by Gombart and colleagues also found that loading vitamin D3 into the nanofibers of a wound dressing significantly increased production of a peptide called hCAP18/LL37, which disrupts the membranes of microbes, effectively killing them.

Nanofibrous dressings containing vitamin D3 could “enhance innate immunity by inducing antimicrobial peptide production,” the researchers noted,5 and in so doing could help wounds heal faster without contributing to the drug resistance that’s characteristic with many antimicrobial compounds.6

The same principle worked when adding vitamin D3 and the pam3CSK4 peptide to sutures.7Vitamin D3 was released steadily over a four-week period, while pam3CSK4, which activates cells’ toll-like receptor that triggers immune responses, in which vitamin D plays a role, was released in an initial burst along with a longer release over the study period.8 Gombart further explained how the process works to fight infection:

“When the toll-like receptor is activated, you induce a particular enzyme to convert 25D3 to its bioactive form, known as 1,25-dihydroxy vitamin D3, that activates the vitamin D receptor. When activity increases, that increases expression of vitamin D receptor target genes, one of which produces the LL-37 peptide, which kills microbes by disrupting their membranes.

The idea is, if you were to have an infection, the sutures would activate the toll-like receptors and start increasing production of 1,25D3 from the 25D3 that’s being released from sutures — so you get both local induction and an increase in the production of the antimicrobial peptide.”9

Anti-infective sutures exist currently, but they typically contain triclosan, an antibacterial chemical and known endocrine disrupter. In addition to contributing to the spread of bacterial resistance, triclosan is linked to health risks such as liver damage, cancer and impaired muscle function. Using vitamin D instead thwarts these risks entirely because it has no such adverse effects and it acts on multiple targets.

“[A] compound like vitamin D not only targets bacteria via the antimicrobial peptide, but other immune responses can also be modulated to help combat infection,” Gombart said in a news release. “Targeting on multiple fronts helps minimize the chance of resistance.”10

In addition to helping ward off skin infections, vitamin D, via its role in promoting healthy immune function, shows promise for preventing a variety of infections. For instance, low levels of vitamin are linked to an increased risk of respiratory infections,11 and a Japanese study showed that schoolchildren taking 1,200 units of vitamin D per day during winter significantly reduced their risk of getting influenza A infection.12

Tuberculosis is a lung disease caused by the Mycobacterium tuberculosis bacterium, and a single oral dose of vitamin D enhances immunity to mycobacteria.15 And, according to GrassrootsHealth, achieving a vitamin D level of 40 to 60 ng/mL during pregnancy can lead to reduced infection risks in babies, including:16

Dutch scientists further revealed that measuring patients’ vitamin D levels can accurately predict their risk of dying from pneumonia within a month of admission to the hospital. The findings suggest that treating patients who have pneumonia with vitamin D supplements may stimulate their immune systems and improve outcomes.17

Adding vitamin D measurement to the pneumonia severity index could also help improve the accuracy of this prognostic tool.18 Vitamin D supplements were also found to be beneficial for treating and preventing community-acquired pneumonia in children.19

What Else Is Vitamin D Good For?

When you optimize your vitamin D levels, you’ll not only enjoy a lower risk of infection but also improved overall health, as a deficiency in vitamin D has been implicated in such problems as multiple sclerosis20 and chronic heart failure, for starters.21

Vitamin D also significantly reduces oxidative stress in your vascular system, which can prevent the development of heart disease.22 In addition, optimizing your vitamin D levels is one of the absolute best flu-prevention strategies available and can also slash your cancer risk.

Previous research found that a vitamin D level of 47 ng/ml was associated with a 50% lower risk of breast cancer, for instance.23 Vitamin D has a favorable effect on immune health, mental health and life expectancy, and, overall, if everyone in North America optimized their vitamin D levels, it’s estimated that:24

Ensuring children’s vitamin D levels are optimized is also important, as a deficiency in childhood may affect their behavior in adolescence, according to a University of Michigan study.25

In later life, vitamin D status is associated with rates of cognitive decline, with one study finding, “Low VitD [vitamin D] status was associated with accelerated decline in cognitive function domains in ethnically diverse older adults, including African-American and Hispanic individuals who exhibited a high prevalence of VitD insufficiency or deficiency.”26 In addition:

How Much Vitamin D Do You Need?

To ward off infection and prevent chronic diseases, the level you're aiming for is between 60 and 80 ng/mL, with 40 ng/mL being the low cutoff point for sufficiency to prevent a wide range of diseases, including cancer.

Research suggests it would require 9,600 IUs of vitamin D per day to get 97.5% of the population to reach 40 ng/mL,30 but individual requirements can vary widely, and you’ll need to get your levels tested to ensure you take the correct dosage required to get you into the optimal range.

Regular sunlight exposure is the ideal way to optimize your vitamin D (as well as glean the other health benefits of sun exposure), but many people have difficulty getting out in the sun, whether it’s due to working indoors, weather or physical limitations. As such, many will need to take an oral vitamin D3 supplement, especially during winter months.

The only way to gauge whether you might need to supplement, and how much to take, is to get your level tested, ideally twice a year, in the early spring, after the winter, and early fall when your level is at its peak and low point.

It’s important to note that vitamin D supplementation must be balanced with other nutrients, namely vitamin K2 (to avoid complications associated with excessive calcification in your arteries), calcium and magnesium.

GrassrootsHealth makes testing easy by offering an inexpensive vitamin D testing kit as part of its consumer-sponsored research. By signing up, you are helping further vital health research that can help millions in coming years. All revenues from these kits go directly to GrassrootsHealth. I make no profit from these kits and only provide them as a service of convenience to my readers.

GrassrootsHeallth is also working to end vitamin D deficiency in children and pregnant women, and believes a new standard of care should be implemented for pregnant women that involves vitamin D testing three times during pregnancy and maintaining blood levels of 40 to 60 ng/mL.

Although such testing is not yet widespread, you can request a vitamin D blood test from your health care provider or, if you’re a woman who is between 12 to 17 weeks pregnant, enroll in GrassrootsHealth’s Protect Our Children NOW! Project. If you’re unsure of your own, or your children’s, vitamin D levels, getting your levels checked is the first step to optimization and better health.

A growing body of evidence shows that vitamin D plays a crucial role in disease prevention and maintaining optimal health. There are about 30,000 genes in your body, and vitamin D affects nearly 3,000 of them, as well as vitamin D receptors located throughout your body.

Vitamin D May Help Protect Against Cancer and Other Diseases

According to one large-scale study, having optimal vitamin D levels can slash your risk of cancer and can help prevent at least 16 different types of cancer, including pancreatic, lung, ovarian, prostate and skin cancers.

Magnesium Is Important for Heart Health

Magnesium is involved in the regulation of blood sugar and insulin sensitivity, which is important for the prevention of many chronic diseases, including Type 2 diabetes and heart disease and dementia. It also supports your brain and heart health via other mechanisms.

It supports healthy heart function by relaxing your blood vessels and normalizing blood pressure, for example. Magnesium also has anti-inflammatory activity, support your endothelial function, and the function of your muscles and nerves, including the action of your heart muscle.

Low magnesium has been linked to a higher risk for hypertension, cardiovascular disease, arrhythmias, stroke and sudden cardiac death. According to one scientific review, which included studies dating as far back as 1937, low magnesium actually appears to be the greatest predictor of heart disease, and other recent research shows even subclinical magnesium deficiency can compromise your cardiovascular health.

Omega-3 Fats Are Crucial to Your Well-Being

Meanwhile, recent research suggests high doses (4 grams) of the omega-3 fats EPA and DHA may help improve healing after a heart attack. Other benefits of omega-3 fats include prevention of lupus and Parkinson’s disease, decreased anxiety, healthier and stronger bones, as well as fighting fats in the body.

How to Test Your Levels

I’m really pleased GrassrootsHealth Nutrient Research Institute has expanded its research projects to include a range of different tests, seeing how deficiency may be needlessly affecting the health of so many. Like its Vitamin D*action Project, the Magnesium*PLUS Focus Project will allow us all to take action on known science with a consensus of experts without waiting for institutional lethargy.

The Vitamin D*action Project has truly demonstrated the value measurement can have on public health, and there’s no doubt in my mind that the Magnesium*PLUS Focus Project will have the same impact. As in earlier projects, once the study of a community is completed, all that information can be used to push for public health recommendations that will benefit everyone. 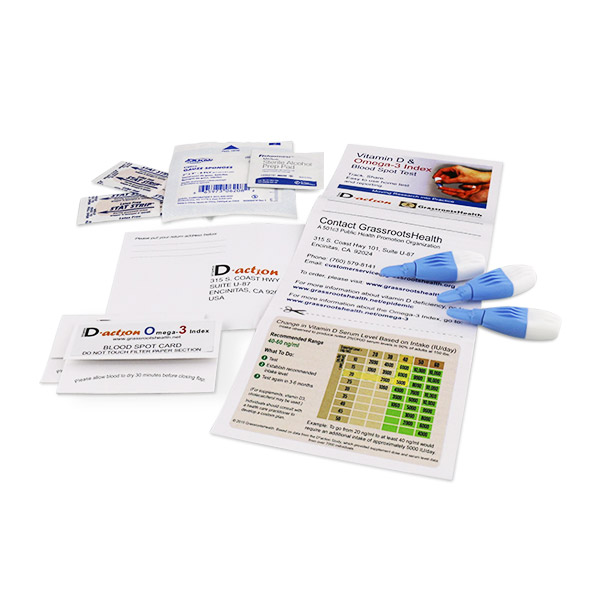 You have the ability to participate in a variety of different tests, including:

With the data from this project, individuals will be able to see what works for them, and, researchers will be able to demonstrate just to what extent health care costs may be reduced simply by getting people into an optimal range.